To say that the child is the father to the man is old news — we all realize the influence of our childhoods on the adult we become. Like the foundation of a house, our childhood experiences are the foundation on which the rest of our lives are built. And if the foundation is not solid — has emotional cracks and wounds — these affect the structure of our adult lives.

Each of has a story that we walk out of our childhoods with — about the way our parents always argued, that our brother was abusive, that our sister was supportive, that our grandmother was the rock that kept us stable, that school was hell. We fill in the story with memories — of that awful argument when our father punched a hole in the wall, that time our bullying brother held us down on the playground until the teacher made him get off, the kind attention of our sister when we lost a toy, the way our grandmother listened when we were upset one Christmas, how we felt lonely when we switched schools in the 6th grade. The memories reinforce the story, and the story reinforces our sense of the story of why we are who we are now.

But while each of our stories are unique, there are broader impacts of childhood that affect us all. Here are the most common ones:

There are decades of research on birth order and its impact on child/adult development. It has suggested, for example, that by and large, the oldest children (or an only child) are likely to grow up and be good leaders, do well in school and be high achievers, be “good” kids, the ones who follow the rules. They can also often be anxious, can walk on eggshells around others, be sensitive to authority, can be self-critical.

Why? Because they bear the full brunt of the parents’ expectations and emotions. They have no siblings to serve as barriers. In this two-against-one scenario, they adapt, are sensitive to what the parents expect, and to emotionally survive in the family, step up and accommodate.

The second child: Often rebellious, pushes the boundaries, questions authority, bucks the system. There’s a theory that our American culture with its independent, land of opportunity, pull-yourself-up-from-your-own-bootstraps climate is the result of all those second-born children who immigrated to the new world because their first-borns siblings would inherit all the property and wealth and so needed to make their own opportunities. Bunching them together in one place, it’s no surprise they found kindred spirits and were ready to start a revolution.

But just as the first-born is reacting to the parents and their expectations, the second born is bouncing off the first-born. Their identity comes from being unlike the first — the anti-good child — and from this stance they are able to grab the parents’ attention.

The baby: The stereotype of the youngest children is that they are spoiled — everyone in the family paid attention to them because they were the youngest, so cute, etc. Getting used to having so much attention without much effort can lead to them feeling entitled as an adult and angry when they don’t get what they expect. But it can also lead to anxiety — because others were always stepping in take care of them, they never were able to build up the strong self-confidence that comes from handling things on their own. As an adult, they can get overwhelmed and then instinctively lean on others to bail them out. 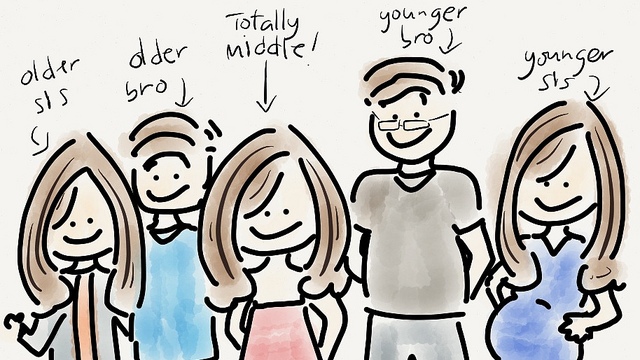 Emotional wounds are about what you particularly learned to be sensitive to in growing up. It is usually one or two of five things: criticism, micromanaging, feeling neglected, not feeling heard or feeling dismissed, not being appreciated. We all walk out of our childhoods with something.

As a child, your only ways of coping are to get good á la first-born; get angry, á la second-born; or withdraw, á la often the middle-born. And like the birth order, you bounce off your siblings — my brother is the good one, my sister the angry one, I’m the quiet one. The consequences here are that you bring these coping styles into your adult relationships and when you feel wounded, do what you learned. The problem is that this often triggers the other guy’s wound (you withdraw because you feel criticized, the other gets angry because he feels neglected) and the cycle feeds off itself with each person feeling wounded and operating out a childhood brain.

And if these wounds come from trauma — abuse, severe neglect, grief, and loss — this adds another layer: When we are traumatized we instinctively, though often unconsciously, decide how we need to be in order to protect ourselves from such pain in the future. Here we decide not to get close to others, to not trust, to cling so others don’t leave, to try and be perfect, to put up a wall of anger.

Or you become hyper-alert. This is often the childhood default for growing up in an unsafe environment: your parents arguing all the time or your mother being anxious and yelling; your dad drinking and knowing his moods could change in a nanosecond; there never-ending tension though you could never quite figure out the source. And so your only defense as a child is to always be on guard — to stay on your toes and try and adjust to the emotional weather. Here the oldest child tries to walk on eggshells better, the second child is always ready to pick a fight, the middle retreats to her room, the baby cries and waits for someone to take care of him.

We usually develop a black and white reaction to our childhood role models. You either identify with the aggressor – I become my mom and can easily yell when I’m stressed or become aggressive like my dad — or I move towards the opposite: I decide sometime in my teen or early adult years not to be like them and instead I never get angry and hold things in, or if my dad drank, I don’t.

The problem here is that your solution is too simple because it is viewed through a child’s eyes. You don’t yell or drink but instead, internalize all your emotions and get self-critical and depressed. Or you don’t drink but instead, act like a dry drunk.

The point here is that all these come together to become the person you are. Your coping styles become your default when you become emotionally triggered, your sensitivities don’t go away and you easily fall back into your childhood feelings and coping styles, your hyper-vigilance doesn’t get turned off and you develop a generalized anxiety disorder, the decision you made to protect yourself from further trauma limits your adult life. You try your best to change your past, but find yourself falling back into the same potholes and behaviors as your parents despite your efforts.

Changing the pull of the past

The foundation that was laid down don’t have to be permanent and can be repaired. The coping styles you developed for a lot of good reasons don’t have to be your defaults now that you are an adult. The challenge for each of us to have ways of redoing and repairing our childhoods, repairing those cracks in the foundation, noticing the triggers, upgrading the software of our brains. Here’s how to begin to do it:

Understand the impact. If you know why and how you became the person you are, you now have an opening to begin to change it. This is self-awareness, the counter to going on auto-pilot — that I do what I do because I do it. If you know you tend to walk on eggshells, can too easily flare up with anger, can withdraw or are sensitive to feeling overlooked or can become passive and feel entitled, you now have a key to unlock that door that is holding you back.

Change your reactions. Psychodynamic approaches help you do this by helping you unravel your past and gain insight into the sources of those old wounds. With this, you can begin to consciously separate the past from the present and then now make different and choices in the present. But you can also do this without all the drudging into the past. You can do it in the present, in your current relationships.

Here you notice and focus on your reactions or over-reactions. You use your self-awareness of your triggers, your wounds, and now proactively decide to do something different; this is what cognitive-behavioral therapy focuses on. Here you slow down and calm your automatic emotional reactions so that your rational adult brain can step in and help you see other options: that you need to speak up rather than accommodating; that you listen to your wants rather than your shoulds; that instead of being angry and rebellious and angry, you use your anger as information to let others know what you need; you move forward rather than retreating and avoiding, you tackle a problem on your own rather than waiting and expecting for others to take care of it for you.

You move against your grain; you do now what you couldn’t do as a child.

Take baby steps. And it’s important that you go slow; you don’t have to do the one-week makeover. Take small steps to redo your reactions: Start with those who don’t trigger you as strongly, whose reactions you care less about. The situation is not as important as your response. This is about rewiring your brain, stepping outside your comfort zone, building your self-confidence by finding out through experience that what your childhood brain is telling could happen doesn’t.

Decide on who you want to be. Often, we leave our childhoods only aware of negative space, who were don’t want to be: not the yelling mother, the drunk father. Instead go proactive, towards the positive, and as an adult define who you want to become based not on your fears, but your image of what a solid good adult can be. This is about defining your values, rather than just following the shoulds, about deciding what role models you want to follow or what role model you want to be for your own children, rather than just struggling to avoid becoming your own parents. Rather than thinking about how you need to be to avoid repeating history, instead think about the history you want to create, right here, today, right now.

Our childhoods are a part of us. While we can’t change the past, we can choose to look at it through a different lens; we can move forward in the present in spite of our childhood wounds, and in the process heal them. Step back, look at what you’ve walked out with, see what you’ve learned, decide what to keep and what to ignore.

And most of all, move forward.

VIEW ALL POSTS BY solomomtoadonorchildcom